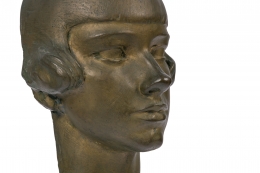 Gertrude Vanderbilt Whitney is best known as the founder of the Whitney Museum of American Art in New York City. Herself one of the better American sculptors of the day, she began her career as an artist and collector in the late 1890s, and went on to win a number of important commissions, including the Washington Heights War Memorial, New York (1921), and the sublime Women's Titanic Memorial (1931) at Fort McNair, Washington DC., this piece is bronze and a marble replica was purchased by the French Government for the Musee du Luxembourg.